10 Sto. Niño Festivals in the Philippines Worth Visiting

The Holy Child Jesus, locally known as Santo Niño, is among the most venerated and recognizable religious image in the Philippines. This is because the image does not only show the faithfulness of Catholics to their religion; it also reminds Filipino of the birth of Christianity in the country. 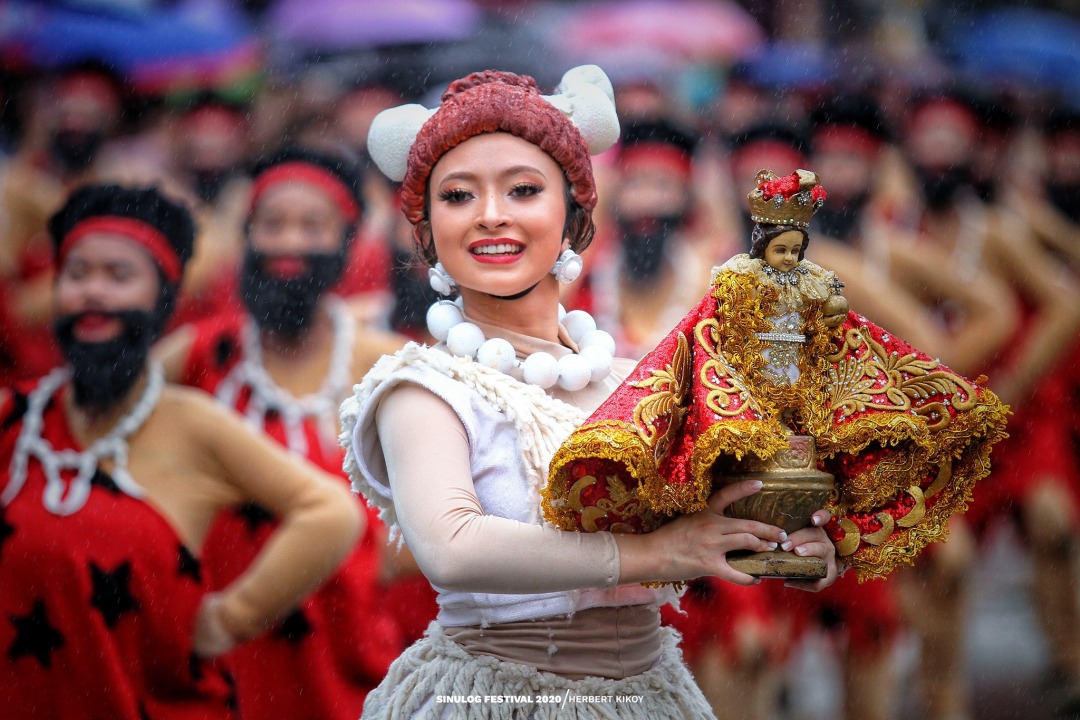 Back in 1951, images of the Child Jesus were given by Ferdinand Magellan and his comrades to the first Christians of Cebu. It is believed that these early gifts survived several battles that took place in Cebu, proving them to be miraculous properties of the province. From then until now, Santo Niño has been considered as the patron saint of Cebu. But its influence is not confined in the Visayas Island.

All over the Philippines, festivals are being celebrated in honor of Santo Niño. Listed below are some:

Being the first people to receive the image of the Child Jesus in the Philippines, Cebuanos celebrate one of the grandest Santo Niño festivals in the country. Celebrated every January, this colorful and vibrant festival hosts several events such as the famous Sinulog street dance, pageants, fireworks show, and of course, the fluvial parade and the procession of the miraculous image of Santo Niño.

Tourists can join the street parties, enjoy Cebuano foods, explore the city, and watch the Sinulog’s main events—the street dance, the grand parade, and the procession. 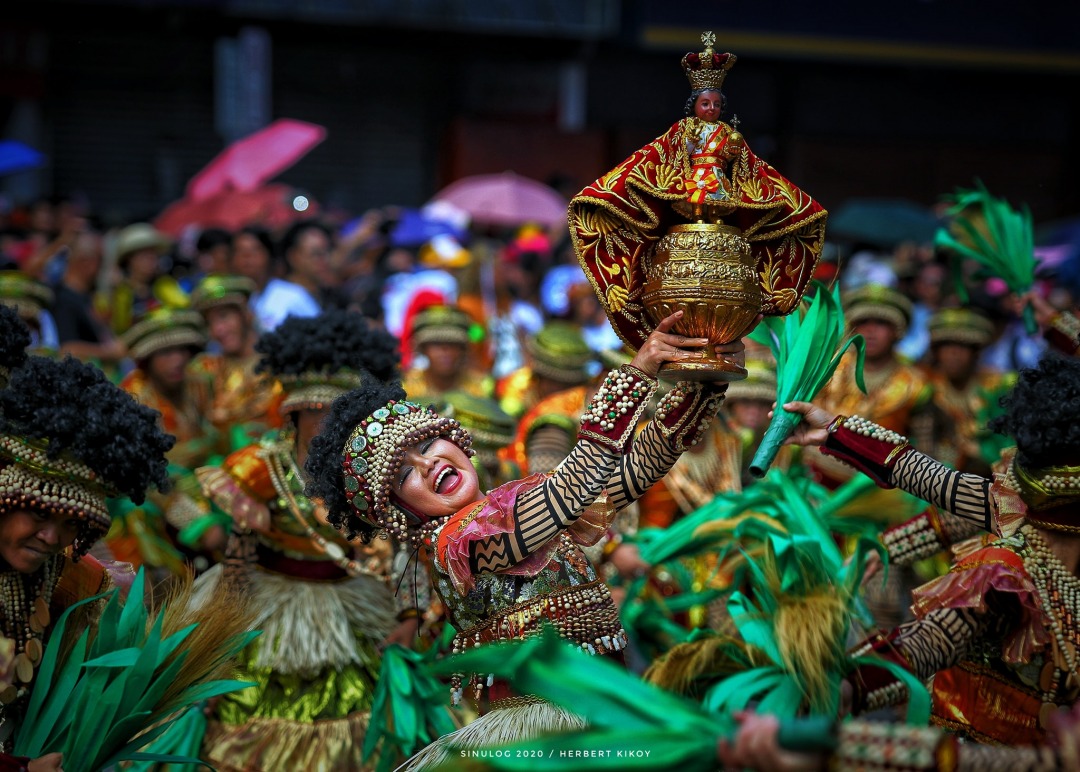 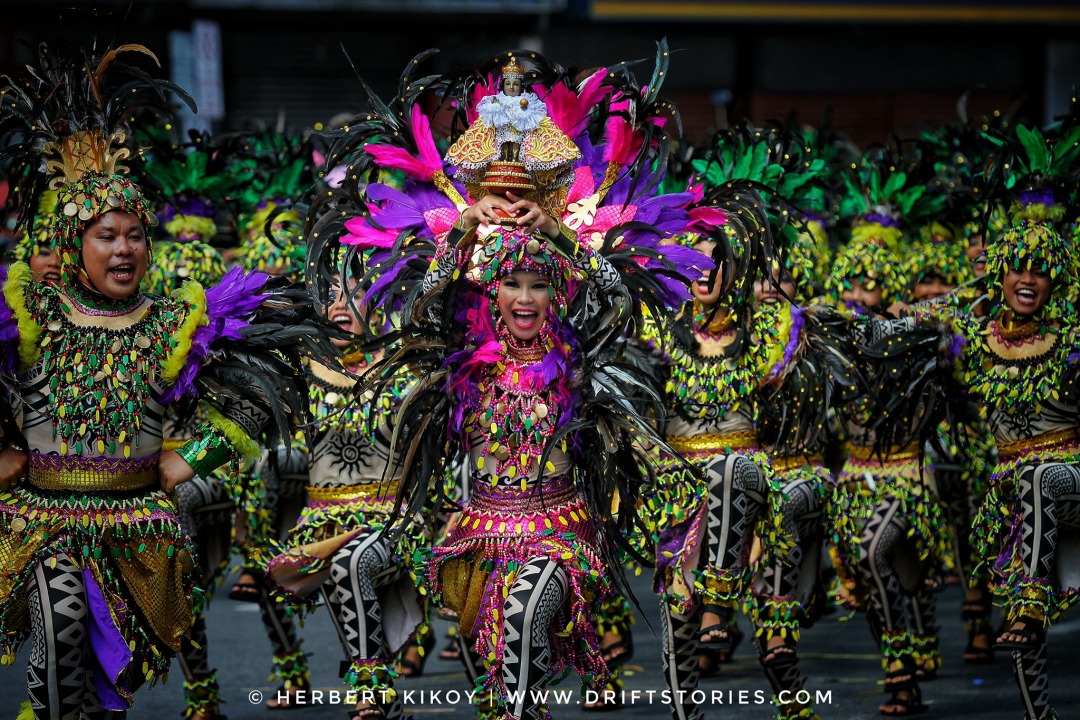 Luzon Island also has its versions of Sinulog. Malolos, Bulacan holds the grandest Sto. Niño Festival in Luzon at the end of January. During this festival, around 200 images of the Holy Child Jesus are included in the annual procession. Similar to others on the list, this event lasts for days. It starts with the “panaog” or the moving of the “Santo Niño of Malolos” from its family owner to the chapel dedicated to it. Devotees, brass bands, and dancers accompany the image of the Child Jesus. The statue remains at the chapel until the night of the feast.

Following the Sinulog and Ati-Atihan, Dinagyang Festival is held every last Friday, Saturday, and Sunday of January. It is celebrated to give reverence to the Child Jesus, as well as to commemorate the arrival of the Malays. Local and international tourists attend Diinagyang to witness. 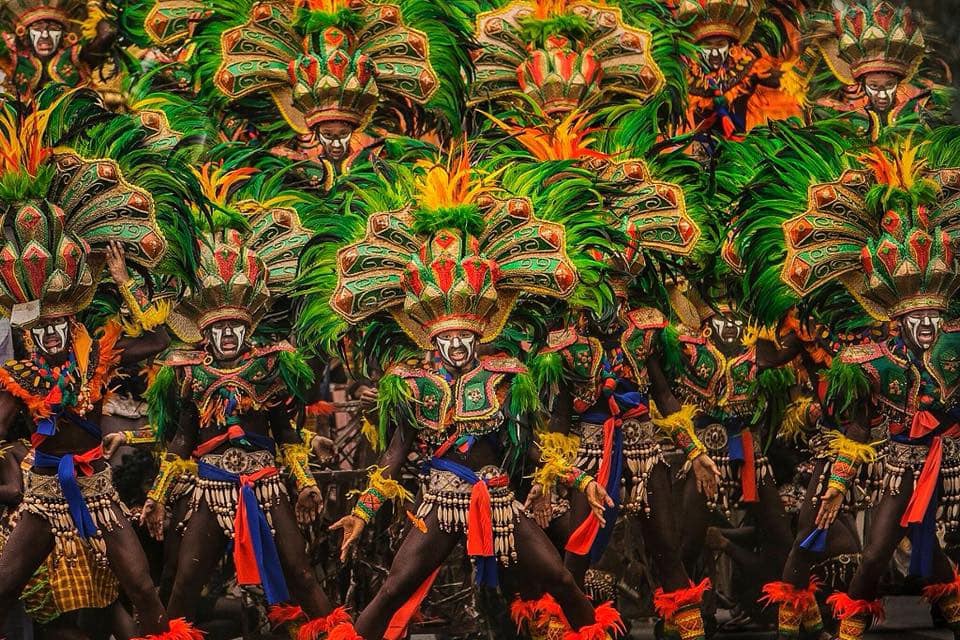 The Halad Festival of Midsayap town’s celebration in honor of Sr Sto Niño. The festival, just like  other Sto. Niño related celebrations is held every third week of the month of January. The festival is highlighted by a colorful parade and street dancing.

A Santo Niño festival that has become part of the lives and culture of people from Maasin City in Southern Leyte.

Unlike the other Sinulog festivals, which commemorates the time when Magellan already gave Child Jesus to Cebuanos, Sakay-Sakay Festival celebrates Santo Niño’s journey prior to its arrival. Because of that, Maasin’s festival is symbolized by decorated boats that move along the coastlines. Dancing competitions are also held in the city’s gymnasium. Sakay-Sakay festival is held every third Sunday of January.

Tondo’s ivory image of Santo Niño is believed to have healing powers and to be miraculous. This is the main reason why the Lakbayaw Festival attracts lots of people not just from Tondo, but also from other nearby places as well. The celebration includes a 26-hour continuous mass in the Tondo Church. On the day of the main event, images of the Child Jesus are placed in a decorated float that would lead the parade of Lakbayaw. Annually, thousands of residents and pilgrims join the procession, carrying their own Santo Niño images, dancing, and chanting, “Viva Santo Niño! Pit Senior!”

This Santo Niño festival has an interesting tale. During the early days, it was believed that Filipino Christians living along the coasts were often attacked and harassed by moron pirates, resulting in bloody encounters. It is said that during one of the battles, Santo Niño supposedly saved the Christians from further attacks.

Starting in 1976, people of Kabankalan City celebrated their own version of Sinulog, called Sinulog de Kabankalan. During the festival, the streets are crowded by people painted in black, highlighting their colorful costumes. They dance with the beats of the drums and the cheer of the people around. The event ends with the search for the Sinulog queen of the year. 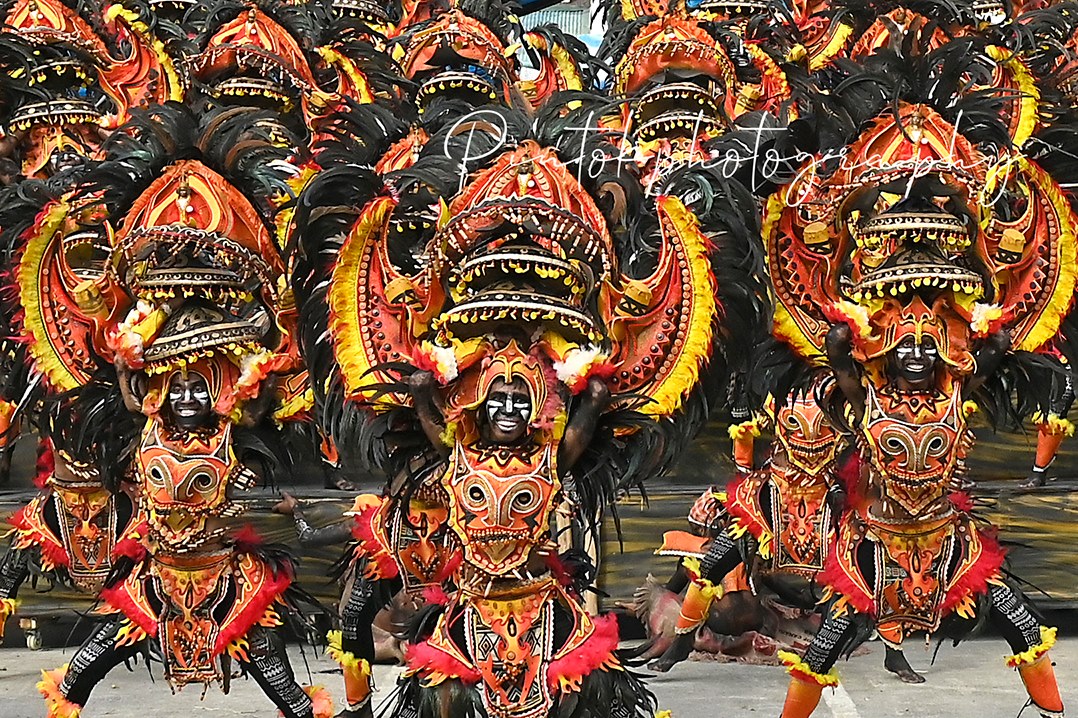 Unlike the Sinulog of Cebu, Ati-Atihan was an older celebration. Long before the Spaniards came to the Philippines, the Aetas and Malays of Aklan created such festivities to rejoice for their harmonious and peaceful relationship with each other. Later during the Spanish occupation, the festival was given a religious significance and turned into a feast to honor the Santo Niño. Regardless of its origin, natives of Aklan give high honor and regards to both the Aetas and the Child Jesus.

While Ati-Atihan is celebrated throughout the province, the grandest takes place in Kalibo. There, a week-long set of events are observed, ending on the third Sunday of January. There are bazaars, food stalls, and street dancing, and several parades showcasing bright and colorful costumes and giant floats.

Schools, religious organizations, businesses, fraternities, and others participate in this annual street dance parade competition. But before all of these festivities, people first give thanks by holding a mass at the Santo Niño shrine church. 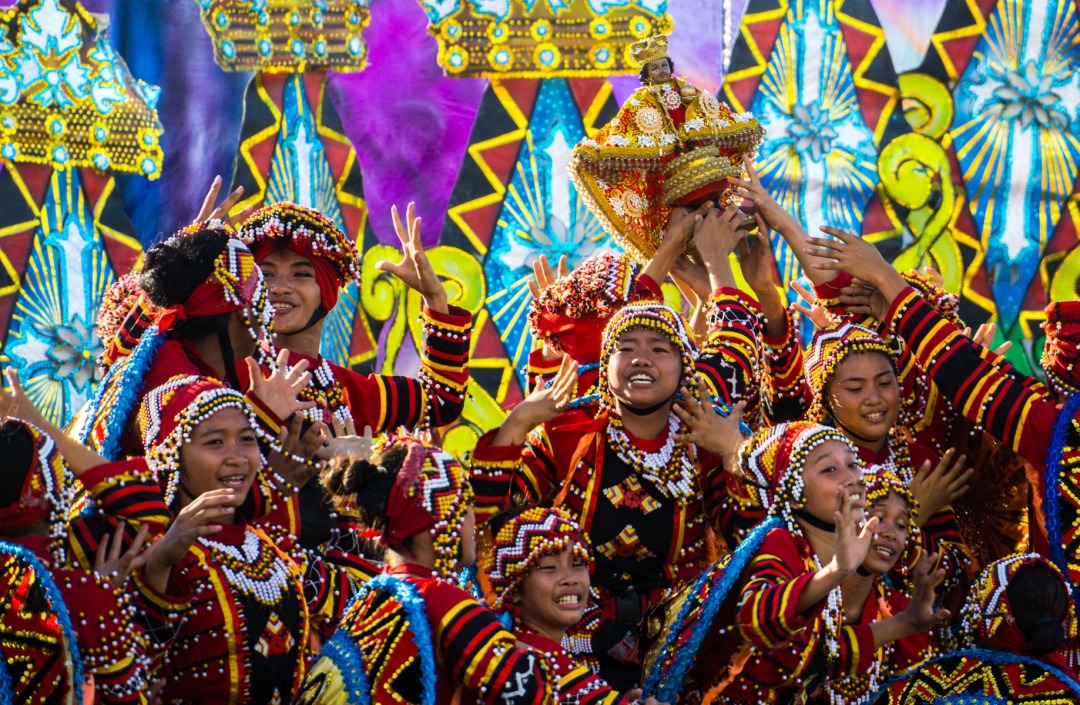 Moving far south, the Butuan also has its version of the Santo Niño Festival, the biggest in CARAGA—the Kahimunan. Kahimunan is a Lumad word which literally means “gathering.” Locals consider Kahimunan Festival as a thanksgiving for the blessings and bountiful harvest. Further, it is also celebrated to honor their patron saint, Santo Niño. The main attraction of the festival is the street dance, wherein dancers that represent organizations or municipalities wear colorful costumes as they move to native music. 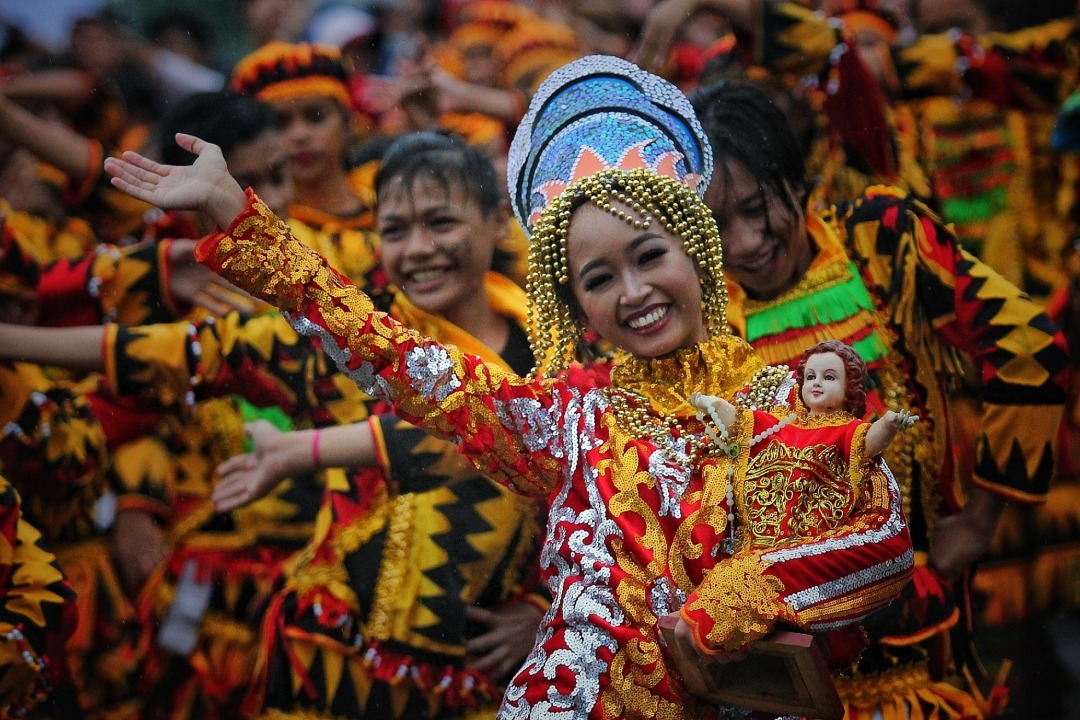 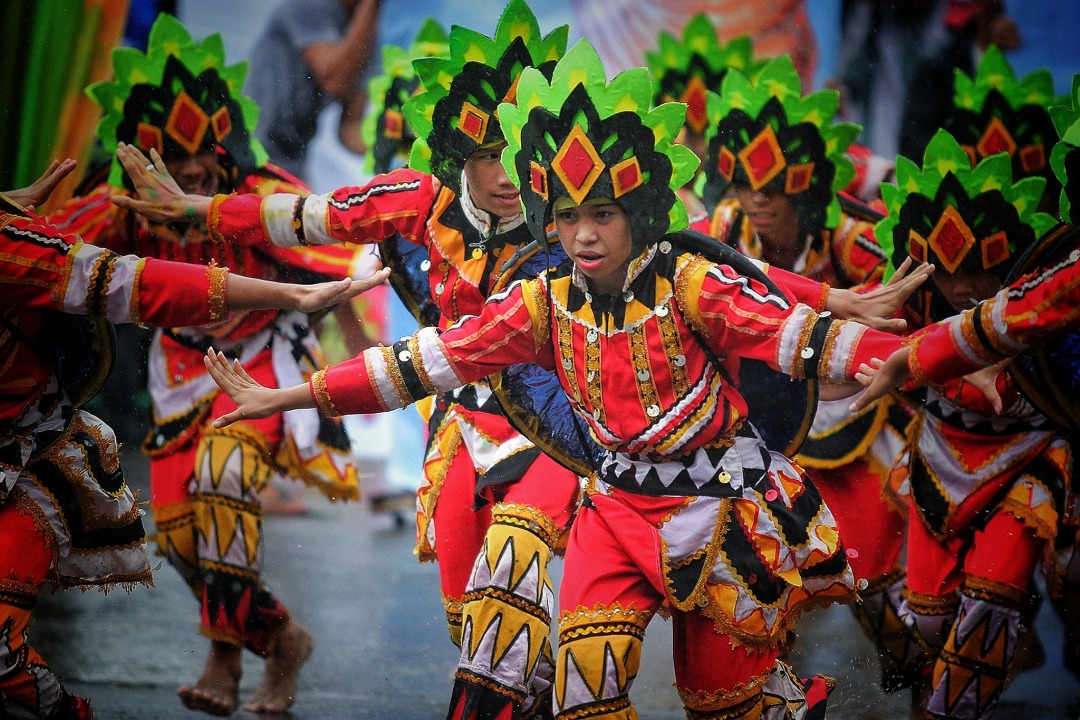 The Philippines is a country of festivities, fun, and religious beliefs. Unsurprisingly, combining these in a single culture resulted in the colorful, fun-filled festivals throughout the country.

The Santo Niño Festivals does not only showcase foods, talents, and beauty; it also shows how Filipinos place honor in return of blessings and good deed.